Getting to the Root of the Economic Problem

When we have problems we naturally ask why? Generally we want to understand what has caused the problem so that we can avoid such problems in the future and save ourselves from reaping the undesirable consequences yet again.* Since so many millions of people are affected by economic calamity there is a great collective why? being raised.

There is a panoply of answers of course, and the answers that people come up with generally depend on their station in life—whether they are the victims or the perpetrators—as well as their conception of life in general. The government and banking elite offer excuses and reasons that generally deflect any blame from themselves and their own malfeasance, all couched in the arcane rhetoric of banking and finance meant to mystify the common man. Through such subterfuge they convince some of the people who see no recourse other than accepting the resulting struggles as their lot in life, and carry on as best they can.

There are others who look in the direction opposite of the official finger that is being pointed—to those elite ‘leaders’ themselves. What are they up to by the policies they have enacted or permitted, and what is their end game? Blaming them tens-of-thousands are marching in the streets to voice their opposition to policies that are destroying their lives.

There are yet others with years of experience, or else a decent education in the history of monetary crimes, who understand that the goal of all economic machinations is to transfer wealth from the many to the few. Of course it is all disguised as an ‘economic calamity’ that ‘just happened’.

Beyond all of this there are yet more answers, answers stemming from other conceptions of life. On this website therefore, the reader will not be surprised that we find the reasons in the spiritual dimension. It is there that we must begin to understand our situation because beginning with that dimension everything else follows in a chain of cause and effect. If we take the effect to be the cause we are mislead, taking the symptom to be the problem. Any and all efforts applied to the symptoms will not, indeed cannot, bring permanent relief. The unresolved problem will simply reappear in other circumstances, and although we may perceive it to be a different problem entirely, it stems from the same, original unresolved cause. The bump in the carpet thing.
If we want to deal with the problem itself, we must trace it out to its root. We make progress by tracing from effect to cause, and understanding that cause as an effect, look for its cause, and so on, back, back, back until we may find the original cause. Dealing with that cause we can now solve all of the subsequent problems that stem from it.

This is the question to be understood, and it can be properly understood from the sankhya philosophy presented in the Vedic literature where it is explained that all living (spiritual) beings is that of sat, cit, ananda—we are eternally existing (sat), full of knowledge (cit), and inherently blissful (ananda). It is our original nature to be not just happy, not just joyful, but blissful—for no reason at all—simply because that is who we are. There is nothing outside of ourselves that we need to be happy. It is there within us.
But we have forgotten that.

Coming to this material world, as is the prerogative of the spiritual being, we have assumed an identity based on the body that we wear. We have assumed ourselves to be products of the material energy, and based on our experiences of material pleasure we assume that we can be fulfilled by having material things and material experiences. Having forgotten that our bliss is within we seek to find it by having more, getting more, and being more in material terms. Thus we think of ourselves in terms of ‘I’ and ‘mine’ although these concepts have nothing at all to do with us. We fill our time with endeavors to enhance our sense of ‘I’ and ‘mine’ not understanding that none of these things that are outside of our actual selves can actually make us happy. If that were true then why are the already egregiously wealthy not happy? Why do they want what you have? Because after giving an initial sense of pleasure, things simply become a burden, increasing our illusion and dissatisfaction.

Yes, dissatisfaction. Why dissatisfaction? Because they lead us to thinking that by expanding what we have we can somehow find satisfaction. But although the desired satisfaction never materializes, the spiritual being chases after yet more, as an animal or man in a desert chases a mirage. While a person suffering in a desert finds water to be the most wonderful and desirable thing, a person who is not starved and dehydrated does not find water, in and of itself, particularly exceptional.

This describes our situation: we are spiritually starved and looking for satisfaction in material things. But we can’t find it there. It doesn’t exist there. Material things cannot satisfy the spiritual person. However, although a minimum of material things are necessary to maintain the body, for one who is properly situated in their normal spiritual condition material things have no value beyond one’s immediate necessity. In the spiritually diseased condition of life we inflate the concepts of ‘I’ and ‘mine’ to such a degree that we create a great imbalance and disturbance in the world. Thus we have the elite top 2%, who are absolutely spiritually bewildered, taking as much wealth of the world as the poorest 50% in an effort to satisfy their spiritual hunger. And even that is not enough because it is the wrong diet.

The bankers, politicians and managers, the top 10% who serve the interests of the 2%, also suffer from the spiritual disease of ‘I’ and ‘mine.’ They also think that they have become the most important people, have become wealthy, have power and control. But from the spiritual perspective all of it is simply a childish game. An illusion. An illusion that ends when that spiritual being is forced out of their body at what is called death. This ‘I’ and ‘mine’ is an illusion that we create for our material experience, as if we had entered a movie theater for a lifetime. Then the film stops and the lights come on when death takes us. What we thought was ‘I’ is finished, it was all just a movie that we played in our minds, and what we thought was ‘mine’ is all left behind for others to use in their movies.

The 2% cannot conceivably use their riches, and the impoverished suffer extreme hardships. This is the result of a world that has become lost to spiritual reality. This is the root cause of our economic problems since all other problems follow as consequences, or effects of this original cause.
The economic problems can easily be solved—for those who have recovered from their spiritual disease. But those who refuse to be treated, who refuse to acknowledge their diseased spiritual condition, can destroy the entire world in the effort to fulfill their fantasies. There is nothing that they will not give to increase their control and sense of ‘I’ and ‘mine’ in an effort to get it all. The majority of the people of the world stand in their way of achieving this end and thus the people are now targeted—being stripped of what they thought was ‘theirs’ and taken by others who want to claim it as their own.

This is a struggle of madness and it can only be stopped when people are willing to wake up to spiritual reality. The purpose of Spiritual Economics is to make everyone aware and affect the cure.

*There are, of course, exceptions to this rule by many who have no interest in the problem whatsoever and who simply try to avoid the consequences of their actions. Such persons are understood to be very much influenced by tamo-guna, the quality of material ignorance that keeps the living spiritual soul, the jiva, in illusion.
Posted by The Inquisitor at 4:57 PM No comments: Links to this post 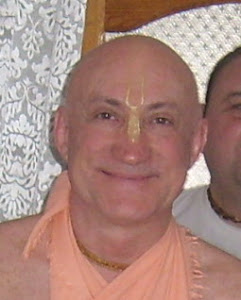